This is not a Ghetto poem 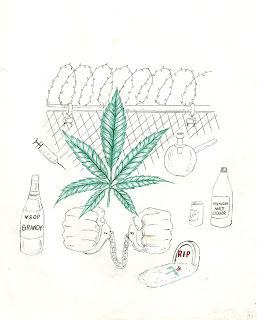 Living the street life (illegally) trying to survive,
it’s called, “The Game of Hustling” in order to stay alive.
A victim of circumstances being influenced by a crime,
they label you as “criminal” and make you serve some time. Trapped in this life-style is like being in a wild storm,
so they send you to prison in order to be reformed.
But the system isn’t working they’re still breaking the law;
the officials are holding a meeting to correct the flaw:
“Give them more time before it becomes too late! This new bill we are passing truly sounds great!”
“Listen up folks, we have a new crime prevention, we’re sure this will work, so please pay close attention…we’re putting them behind bars and we’re imposing stiffer sentencing, on violent crimes including stealing cars. The new bill is for drug dealers, illegal aliens, and money criminals stole,
Stopping crime is definitely our main goal!
When the law goes into effect prison terms will be increase, and they MUST meet special requirements before being released! They most get a work assignment and G.E.D, this will help them in society when they are free!
But these are not the only things they must do, They must complete psych therapy before their parole review. We want them to be reformed from hate, racism, and selfish pride---all their health care, food, and shelter-we will provide! If they do our requirements we may set some of them free! But if they don’t take us serious, then prison is where they will be.
They shall maintain the right to an appeal, but since they cannot hire an attorney I doubt if they will!”
This is the attitude of the officials to try to rehabilitate, let’s vote them outta office before it’s too late!